Just before the holidays, I agreed to a short-term contract for a set number of hours to complete a specific task. Then the term ended and holiday travels began. My car broke down, winter storms arrived, and the contract was pushed to the back burner. But then I found out that the deadline was fast approaching. Somehow, in the exchange of emails, I had missed the date. With only four days left, I began a task I had never encountered: creating an index.

For those who rarely encounter indexes in their reading, a useful index provides readers with a list of relevant, important topics covered in the book and locations where those topics occur in the text. The concordance appended to a Bible or Qu’ran is more appropriately called an index, because the list is not simply a list of all words, but a carefully chosen and filtered set of significant terms. Obviously, an index is important for any critical text, especially if the primary audience includes scholars.

The Chicago Manual of Style says that the index for a 300-page book can take as many as three weeks to prepare. The book I was assigned to index had 330 pages. I had four days, and my contract was for 25 hours. And I had never before attempted to write an index. I began to question my sanity for accepting the task.

Once I began, I realized that there is much more involved with building an index that I could have imagined. Even with computational methods for creating a list of terms occurring in the text, each term must be evaluated for significance. Any term might better fall under a different term, as a sub-entry, or be used differently in two chapters. The process of evaluating each entry was exhausting.

Between Friday morning and Monday afternoon, I put in forty hours of work to build the index. My employer graciously extended my contract to cover the extra hours. The index was finished in a time span I would have laughed to imagine. And I had somehow remained sane. 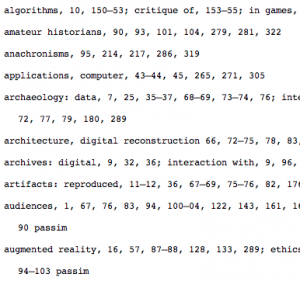 Looking back, I have realized something remarkable about the process of indexing: it produces the closest reading of a text that I’ve ever experienced. I knew exactly which terms and concepts appeared on which pages and how they related to other concepts throughout the book. I didn’t even mean to learn that, except to accomplish my task. But then, even the Chicago Manual says, “The ideal indexer sees the work as a whole, understands the emphasis of the various parts and their relation to the whole.” If that’s not the definition of a close reader, I’ll eat my hat.

I don’t recommend building an index. Apparently, professional indexers exist; we should thankfully allow them to do their jobs. But if you ever find yourself with that unpleasant task, take heart: you will unwittingly learn everything about the book. In excruciating, numbered, and collated detail.

One thought on “The Closest Reading?”