Many scholars, even historians, use spreadsheets for tasks such as grading or accounting. Some might use programs such as Microsoft’s Excel Spreadsheets, while others use Google Spreadsheets or even Open Office. Regardless of which program we use, spreadsheets are powerful tools that allow us to collect and query information.

In most tasks for which spreadsheets are suitable, we only use one or two basic formulas or functions to manipulate the information contained within each cell. In a budget, for example, we might use the SUM function to add our expenses in one month. We might also use AVERAGE to see our average monthly expense total.

Grading and budgets are important, but historians often ask more complex questions about their data. Simple functions such as SUM and AVERAGE can be useful to an historian, but there are other functions that can save time and labour. Although collecting, manipulating, and maintaining data is important and should not be overlooked, historians can use spreadsheets and functions to shift their time balance from data creation toward data interpretation.

The following sections introduce good principles for using spreadsheets, helpful hints, and functions that historians might find useful for their research.

Two values in one column. Imagine trying to sort by last name.

One value in one column

Basic components of a function 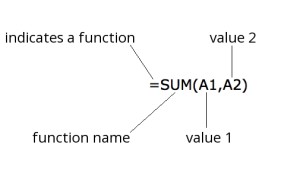 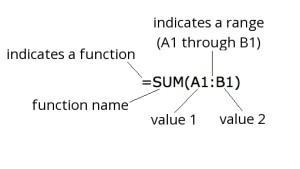 A Function Using a Range

A Function Using Cells and Numbers

The principles, hints, and functions described above are only a very brief introduction to spreadsheets for historians. Excel, Google, Open Office, and other spreadsheet programs have hundreds of functions. Not all of them will be useful to historians, but some functions can save us time and frustration. Use the lists of functions provided by the software developer to learn how they all work and how to use them:

If you can’t figure out how to use a function, search for it on Google. Test out their capabilities, experiment, and do not be afraid to fail. Finding the right function might take time, but the results will be worth the effort.

— This article has been cross-posted to the Doing Digital History Institute website.