Think about your hometown, that peculiar and unique arrangement of open spaces, thoroughfares, domiciles, and workplaces. In an older town, streets might twist and contort in defiance of regular angles, remnants of an age in which transportation was defined by hooves and wooden spokes. I grew up in a Victorian oil boom town with streets of drafted symmetry and equal divisions. Over such streets loom brick houses with many dormers, awnings, and even towers. The largest of these hide carriage houses behind hedges and ivy. A main street dominates and separates the town before continuing east and west for many miles, unbroken and unbending. In fact, the ruled streets of the town are only a subset of the larger system of carefully planned county roads that divide the entire region into a grid. Ignoring slight variation from inconveniently placed natural shallows or slight ridges, this grid is symmetrical and orderly. Except in one place: from my hometown to a nearby river and industrial plain runs a road, once covered in planks, in an ugly diagonal gash in the otherwise orderly system. When oil barons wanted to move their product from field to refinery, they would suffer no delay or tangent. The best designs of imperial planners could not resist the impatience of the industrial age.

The offending road, long known as Plank Road, raises similar questions from nearly every resident of the county when they first recognized its deviance. The legend of Plank Road is continually brought to life by each parent who passes on the tale of oil wagons carrying precious black gold from derrick fields to the refineries and boats waiting to process and transport. It is an industry that no longer defines the entire county. Presently, there are few derricks visible, though grasshopper pumps nod peacefully in rural neighbourhoods. Similarly, the refineries have been replaced with petrochemical plants that receive refined oils from the Alberta tar sands. If you have chewed gum in the last fifty years, you’ve enjoyed the rubber products of that county. The defining characteristics of the region have changed since the first planks were laid, but their influence persists, etched in the earth and on our maps. 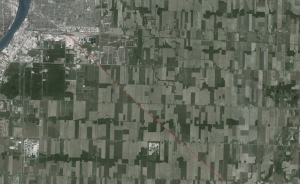 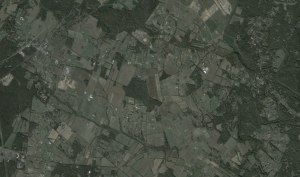 In 2002, surprising few historians, John Lewis Gaddis suggested that history was perhaps a kind of mapping. “If you think of the past as a landscape,” he wrote, “then history is the way we represent it.” He did not mean, of course, that history was simply the making of the maps we commonly use to navigate or locate. Rather, history is a process of collecting, understanding, and representing information that relates to the past. The past cannot be replicated perfectly (time does not permit it) but it can be represented, in part, by the studious and careful work of historians, whose products attempt to achieve accuracy. Historians have long understood that their work was representational, though perhaps they have not used the term “mapping.” It is true, however, that historical narratives are mapping; historians use discrete points (usually documents) to place a marker in time and space, then connect series of markers to represent networks, communities, societies, and nation. The markers never tell the whole story, so the historian fills in the middle spaces with narrative. From persisting artifacts and informed narratives, history is made up.

But then so are maps. All maps are fictions, in some way. Mark Monmonier wastes no time explaining that in his book about mapping. In his first sentence, he writes, “Not only is it easy to lie with maps, it’s essential.” A savvy user of the internet will recognize this as trolling; others might call it baiting. When the uproar settles, Monmonier explains further: “To present a useful and truthful picture, an accurate map must tell white lies.” Along with nearly every scholar who tries to explain mapping, Monmonier observes that a perfectly accurate, precise, and exact map of anything would simply be a copy of the original, similar in every way. A full-scale model of a Victorian oil town is difficult to stash in the attic. So maps lie to us, in order to be useful to us, and to present a carefully selected version of truth. So whether maps are lying to us about the physical geography of a space, or history is lying to us about the multilinear occurrence of events in the past, we must accept that these are necessary acts and move on to a more important question: how should historians map with digital technology?

It is no longer important to whether historians should map with digital tools at all. Many historians have begun this work, and had they not, history would suffer. Recent collections edited by Anne Kelly Knowles and Amy Hillier (2007) and Bodenhamer et al. (2010) have listed numerous projects that use digital mapping techniques to investigate the spatial attributes of the past. Upon review, however, these projects indicate that historians are not finished developing and attending to theories of historical mapping, especially in the digital age. The most prevalent spatial histories being produced are using Geographic Information Systems. These are now called historical GIS (HGIS). In essence, GIS software is mapping distilled into a very basic form. Data related to location is represented in graphic form, sometimes as geographical maps. Populations, birth and death rates, incomes and taxes, voting results, and all manner of recorded data and primary sources can be represented. The resulting map, however, is not a primary source. Historians make selections and decisions that shape the final form of the map, which can then be used as a point of inquiry, representing otherwise obscure patterns in the data.

For instance, imagine a method for creating a map of the two dimensional space in which articles and advertisements are arranged on the pages of a newspaper or magazine. Like any document, these pages are carefully planned by editors, yet historians lack a systematic way to analyze those decisions. Currently, a single historian could read each page, create notations, and then analyze their observations. In each new investigation, however, the historian must do all of that work again to uncover new points of analysis. Perhaps the historian notes that weight loss ads appear next to articles about fashion, but later decides to see what other ads appear nearby. Without a system of markup, spatial data, and encoding, each new question must begin from the start. Using a standard attribution method and GIS, however, the historian could use search terms to find co-located items throughout every issue of a magazine, and replicate the search for every new question. Each of those pages has become a layer of the map that historians can analyze to better understand the choices and motivations of editors and society.

Despite its use as an analytical tool, however, such a map can hardly represent a historical narrative. Therein lies the most crucial point for historians who hope to use digital mapping in their work: we must move beyond replicating the methods and forms of GIS that we’ve inherited. Bodenhamer describes two possible futures for the use of GIS in history. In the first, GIS “finds patterns, facilitates comparisons, enhances perspective, and illustrates data” in ways that augment conventional historical methods and representations. In those tasks GIS is useful, writes Bodenhamer, but “does not replace expert narrative.” If historians engage with GIS in this supporting role only, the potential of mapping to reshape history will be squandered. Although the production of historical narratives through images and film has advanced only slowly, mapping offers an effective way to represent vivid, compelling histories. Politicians, housing and commercial developers, environmentalists, industrialists, and even advertisers use maps as arguments. They do not take maps as received and try to identify the meanings within. For various and sometimes nefarious purposes, they turn data and imagery to their advantage, telling the story that best supports their goals.  Historians must become conversant about mapping in part because “maps, like numbers, are often arcane images accorded undue respect and credibility.” More importantly, historians must turn their professional ethics, skills, and perspectives toward producing maps that represent the past and make historical arguments.

Although historians agree that our representations of the past are necessarily incomplete, we still strive to produce accurate perspectives and deep narratives that demonstrate enough evidence to support our arguments. Thus, if we create maps that represent and make arguments about the past, they must reflect the standards applied to our written narratives. Bodenhamer suggests that one form historical mapping might embrace is the deep map, a “subtle and multilayered view of a small area of the earth.” Drawn from the experiments of the Situationist International and demonstrated in the work of William Least Heat-Moon, deep maps are “a conversation and not a statement” about the space upon which they focus. They provide a platform that facilitates open sharing of information and perspectives, the kind of interaction that historians have only recently begun to recognize and encourage. Bodenhamer paints a picture in which deep maps are “visual and experiential, immersing users in a virtual world in which uncertainty, ambiguity, and contingency are ever-present, influenced by what was known (or believed) about the past and what was hoped for or feared in the future.”

Historians must take note of these developments because whatever hesitation we have felt about mapping generally now threatens to stand in the way of a new form. According to Clifford McLucas, “Deep maps might only be possible and perhaps imaginable now—the digital processes at the heart of most modern media practices are allowing, for the first time, the easy combination of different orders of material—a new creative space.” Many historians have opened their methodologies to include digital tools and methods, but the possibilities of digital mapping techniques require even further exploration and experimentation. Historians must become conversant about mapping and its potential, but also tinker with new technologies and methods that reshape the ways and forms of mapping. For these reasons, perhaps digital mapping is the most challenging new skill to learn, because it requires that historians become competent (if not expert) map-makers, but also become skilled in digital tools. Daunting though these obstacles may seem, we now have the opportunity to experiment with new forms of historical narrative, to build histories in text and graphic form alongside one another, not merely keeping up with the digital age, but pushing it forward.