Upon completing my latest readings about the changing theories of history, I began to imagine how I could create a visualization in the place of my usual response article. I was inspired by David Staley’s argument that historians should open their scholarship to the possibilities afforded by visual representation. Staley suggests that visualizations offer new forms and syntax with which to present arguments about the past (also known as history). The limitations of writing are well-known and accepted, but should not prevent historians from exploring alternatives. So I wondered if I could represent through a visualization the impressions I took away from his and the other texts.

But I came to realize, as I pondered the form and content that I would include, that I know very little about the creation of critical, effective visualizations. Despite my background in drafting and design, I’ve spent nearly all my life understanding and responding to the world through spoken and written words. Most of the training I’ve received has been oriented around reading and writing, rather than looking and drawing. So when I tried to imagine a visual representation of my thoughts, I was at a loss. And now, ironically, I’m writing a story about my struggle.

In the texts that I read this past couple weeks, Hayden White, Elizabeth Clark, Adrian Jones, David Staley, and assorted other scholars agree that history is bound tightly (almost inextricably) to narrative. Conventionally, historians use words and sentences and paragraphs and chapters and books to tell rich narratives that attempt to represent accurately the past. They rely on written records, diaries, reports, letters, log books, account books, pamphlets, newspapers, and numerous other documents to provide details about past events and people. They analyze documents, interpret their meaning, and synthesize a narrative that claims to represent the past. No historian would argue that their narrative is the past, but they attempt to bring their account close to the “real” events.

All of the process described above answers what a historian does, but not at all why. In the earliest years of the professionalization of history, arguments about professional historians were based on their practices. Objectivity, completeness, and documentary evidence were necessary indicators of professional history. Over time, changing theories in philosophy and literature began to influence historians, causing them to question the degree to which their work could ever represent the past; despite those questions, however, historians continued to practice. By focusing on defining what history is, scholars could avoid too much anxiety about why they worked in particular ways.

In the 1980s, Hayden White argued that narrative had become important to historians because it provided a way to represent the past in a way that fulfilled human desire for “coherence, integrity, fullness, and closure.” Life as it is experienced daily provides very few of these answers, and so only in retrospect can we weave narratives that fulfill our desire for those features that create meaning. Because historians take on the task of understanding and representing the past, they often turn to narratives, a form familiar and comfortable for most humans.

Understanding why humans are drawn to narratives or stories is a goal that scholars will never fully reach. It is also a topic too large for much discussion here. But perhaps the human perception of time, our limited capacity to consciously attend to all our senses, and our tendency to focus deeply rather than broadly has shaped the form of human memory. In each moment, we are only aware of a few events occurring simultaneously, and so recalling a moment is necessarily limited in scope and marked by passing time. In order to process particular senses deeply, we ignore others and so remember the past incompletely. Although time is linear, it is also simultaneous, creating a layered linearity of which we perceive only a small fraction. Thus, when remembering the past, we imagine linear narratives of limited simultaneous events.

Likewise, historians use that form to represent the past. To represent a battle or disaster or celebration, the historian focuses on a limited space, time, and number of simultaneous events. The narrative that emerges is limited, but satisfies the human desires that White identified. As a model of the past, this historical narrative is imperfect, but so too is every other model of that convergence of time and space. A perfect model cannot exist, so we use narratives as a close approximation.

No scholar who currently writes about narrative has suggested that historians should abandon it. The processes and conventions that encircle historical narratives are valuable to the profession and the public. Human experiences throughout the past have been thoroughly analyzed, interpreted, and modelled using narratives; in the best cases, those models provide new understanding of human interaction and behaviour that helps shape our actions and decisions today. It seems necessary, however, to expand sideways from narrative into additional forms of representation that will allow us to model with greater detail.

Staley points out that humans have used visual representation longer than written language, as seen in physical artifacts of human figures and pictorial painting on cave walls. Even before language provided extended communicative functions, humans had always created models of their experiences. Visual representations of human experience have grown to include everything from painting and photographs to sculptures, charts, and maps. These can represent physical space, personal interactions, specific events, and even concepts such as feudalism or trade. These forms, and those not yet imagined, have potential to make historical arguments; many historians, however, treat visual representations as mere aids to the written narrative, or even worse, as distractions.

Exactly why historians are hesitant about visualizations, especially visual secondary sources that make historical arguments, is difficult to determine. Perhaps it is their lack of familiarity with the practice, though that cannot explain why historians haven’t become familiar over time. Perhaps visual secondary sources do not share enough similarities with narrative for historians to recognize that they still embody the values of history. Visualizations do not necessarily involve chronology, linear progression, or even a story of any kind; in fact, they can involve spatial or conceptual relationships that are not easily expressed in written language or narratives. For historians who value narrative, visual arguments about the past are uncomfortable.

Although historians have been concerned about narrative (and its implications) for nearly a century, discussions persist to this day about whether narrative is required (or appropriate) in history, and what history might look like without it. In fact, these discussions mirror many others that are asking the same question: does this form/method demonstrate the values of historical scholarship? Narrative has not always met the criteria; for historians concerned with analysis and content, narrative was merely an aesthetic form. Yet historians continued to write, so narratives persisted. Now historians are confronted with and question the validity of digital visual representations, augmented reality, and virtual re-creations. Similarly, tenure committees struggle to define those values in order to evaluate new forms of scholarship such as digital projects, web-based publication, and research tool development. Across the discipline, new forms and methods are contributing to longstanding tensions about the values of professional historians.

In 2004, William Cronon listed twenty values (or intellectual leanings) that historians share. Narrative comes last on his list, but its important is made abundantly clear: “historians have never abandoned our commitment to narrative storytelling as an essential rhetorical and analytical tool for conveying historical knowledge” (emphasis added). Many of the other values, such as study of documents, contextualization, analysis of cause and effect, and even periodization, can be incorporated easily into visual representations without limiting their possibilities. The requirement for narrative, however, would bind visual representation, turning it into a mere visual translation of words and eliminating its potential as an alternative.

The above argument does not suggest that we should abandon narrative, nor does it attempt to identify the underlying value that narrative provides. As we further expand our skills and methods to include the digital, however, we must attend to the limitations and implications of conventional representation. If we do not, we will create histories with digital tools that add nothing new to history. The traditional representations, including narrative, will never lose their potency and importance; without new representations built on solid values, however, scholars will find that new tools alone cannot add new ways of making meaning. 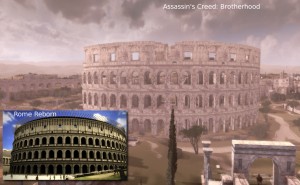 The Roman Colosseum in Virtual Forms

There are numerous ways in which we might experiment with new forms of representation. J. P. Gee, as mentioned in a previous article, suggests that new digital media and learning would benefit from worked examples, much like those used in the sciences. Historians would benefit from those experiments also. In a previous research paper, I argued that an augmented reality application could serve as a platform and tool for a community to participate in the creation of massively collaborative histories (MCH). In such an experiment, historians cannot write a narrative of the town; instead, they put their professional skills to work by collecting and sharing evidence, by facilitating the community’s analysis and interpretation, and by assisting in the creation of a collaborative history. Only by experimenting with AR or virtual reality or mobile web can we understand how to put the values of professional histories to work in the ever-expanding array of representational forms. In some cases, narratives will emerge; others might become multilinear spatial interactions. In either case, we must be open to the possibilities of the form while maintaining our values.

1. Staley, David J. Computers, Visualization, and History: How New Technology Will Transform Our Understanding of the Past. Armonk, N.Y.: M.E. Sharpe, 2003.

5. Gee, James Paul. New Digital Media and Learning as an Emerging Area and “Worked Examples” as One Way Forward. Cambridge: The MIT Press, 2010.