a Cow and Calf, which died by reason of the American Troops leaving flour on the plains whereby over eating herself she burst.

On the 10th of December, 1813, a cow and her calf were left alone in a snow-covered field while her owner sought refuge with distant neighbours. The town of Niagara was burning; the residents were fleeing. Although the cow was left in the cold, she found an unusual source of food: the snowy ground was covered with white flour. She began eating this strange substance, making up for the lack of other food. 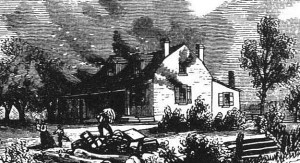 Unfortunately for the cow, white flour and other finely-ground substances are not compatible with the internal organs of cows. According to the Agriculture and Agri-Food Canada, the fine particles of flour are digested too rapidly for the cow to expel gases, which accumulate, expand, and cause injury to the cow. But why was the flour on the fields in the first place?

The circumstances of the cow’s death are unusual, though not necessarily criminal. An American army had occupied Niagara since May 1813, but they decided that the position was  vulnerable to attack by the British, who were advancing from Burlington Heights (now Hamilton).

In order to prevent the British soldiers using the town as a barracks during the winter, the commanding general ordered that the town be burned to the ground. Residents were given twelve hours notice to remove themselves from their homes and seek refuge elsewhere. Unfortunately for the people and the cow, December in Niagara-On-The-Lake has an average temperature around 0˚C (32˚F) and average snowfall around 6 inches (via Weather Underground).

In their hurried retreat across the river, however, the troops must have found themselves in a dilemma. They couldn’t move all the supplies across the river in time, but they didn’t want to leave any supplies for the enemy. I can imagine that one soldier looked at a bag of white flour, looked at the snow on the ground, and thought, “I bet that would work.” The flour would blend into the snow, and the British would be unable to recover the flour for their own use. It must have seemed like a brilliant idea.

Unfortunately, no one thought of the cow. In 1813, cattle bloat was known to farmers, but the causes were not. No one could have predicted that eating flour would cause serious digestion problems and death for the cow. The burning of Niagara caused suffering and loss for the residents of the town, including Elizabeth Campbell, the widow who owned the cow. She escaped with her four children, but her infant child did not survive the harrowing journey. Thankfully, she and her other children survived the war and managed to rebuild their lives.

When Elizabeth submitted her war loss claim to the board, she did not include the cow. Rather, her son Edward was entitled to the house and the cow because he was the legal heir of his father’s property. In the end, Edward received some compensation for the house, but the Board of Claims denied the value of the cow, citing a lack of “evidence for the cause of loss.”

I’m not sure I blame the Board of Claims for questioning the story of the Campbell’s cow. The sequence of events seems so strange: an army invades, occupies, and retreats from a town; they burn the houses; they spread flour on the fields; the cow eats too much flour and dies; and the Campbells accuse the Americans of causing the cow to die. In retrospect, the story is strange, but makes sense. In 1813, it was a long shot.

I would like to thank Sandy Adams for her insightful comments, which led me to investigate further the circumstances of the cow.