Home » Contemplative » On Losing the Past

A common question in digital humanities, particularly digital history, is whether or not to preserve as much as possible, and how to accomplish that preservation. The debate has strong arguments on both sides and applies equally to born-digital and analogue materials. During a recent trip to Harpers Ferry, however, I witnessed a more physical and unavoidable loss of the past that no amount of debate or preservation can recover.

Geographically, Harpers Ferry was an ideal location for many things: transportation routes, water power, and manufacturing of all kinds. The convergence of the Shenandoah and Potomac Rivers creates a natural gap through the Blue Ridge mountains, which has carried travelers since before the arrival of Europeans on this continent. In the 1700s, the accessibility of the gap became apparent to settlers, and Harper’s Ferry, a town and literal ferry to cross the water, was founded.

The flow of water around the hills provided a source of natural energy. Waterwheels and turbines converted the water’s kinetic energy into mechanical and electrical energy to drive machines and mills built along the rivers. The town grew up on the hillside, but also grew along the islands in the river. Factories, mills, rail lines, bridges, and houses filled each acre of available land, all of them just feet from the banks of the river. 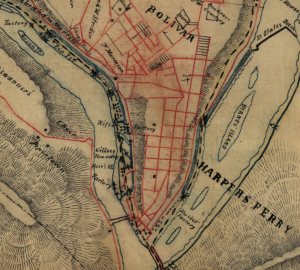 A map section from 1864, showing the factories along the rivers

In the mid 19th century, Harpers Ferry became a hotbed of violence. In 1859, abolitionist John Brown organized an infamous raid on the arsenal, but was subsequently captured and executed by federal troops. Brown’s goal was violent abolition and his actions aggravated the growing tension between northern and southern states. As a major manufacturing and transportation center, located in a region between the north and south, Harpers Ferry became a central site of contest during the American Civil War.

From the beginning, however, the Shenandoah River was simultaneously a source of creation and a force of destruction. Floods washed away bridges, houses, factories, and lives. After each flood, the town would rebuild on the stone foundations that resisted the mighty river. 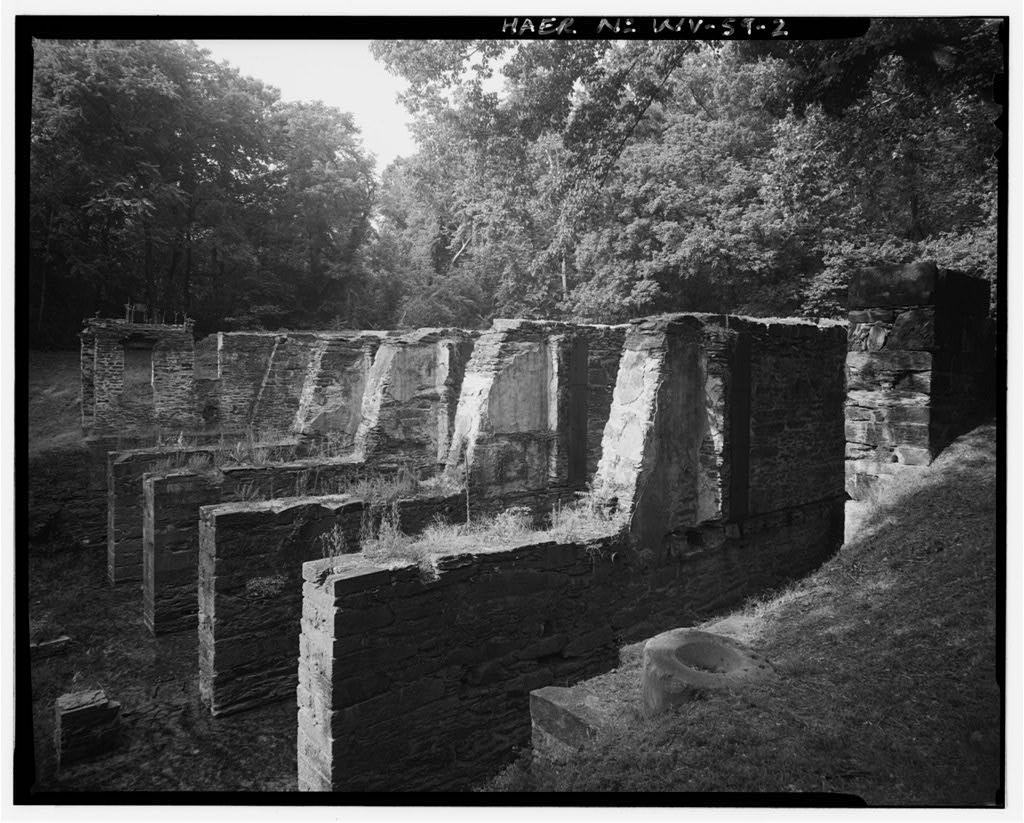 Destruction of property during the war was also followed by significant rebuilding. In time, however, changes in transportation and manufacturing meant that the town had fewer and fewer resources with which to rebuild. 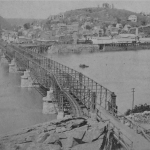 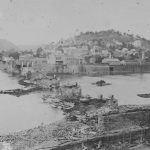 The diminishing need for rail transportation and increasing diversity of cheap energy sources meant that the water power and rail lines in Harpers Ferry became less valuable. Their vulnerability to the river made maintenance more expensive than their worth to commercial investors.

Today, Harpers Ferry is a weak shadow of its former self. There are no buildings on the islands in the river. The foundations of mighty factories that churned out thousands of rifles are filled with vegetation. The ruins of houses are barely visible through the grass. On the hillside, above the flood line, shops and restaurants are matched in number by National Park Service museums. The entire town is a national park.

Taken in 1906, this photograph captures one moment in the past, in which three bridges are visible. Other bridges predated these, and only one of these bridges remains. 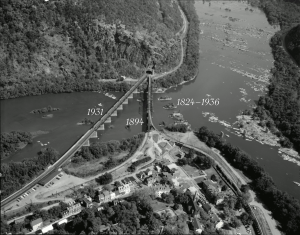 This aerial photograph shows the pilings of the oldest bridges, the surviving 1894 bridge, and the newest bridge from the 1930s

Some of Harpers Ferry’s past is obscured by existing structures, while other pieces of its past are completely invisible. Pilings are still visible from bridges that were built from the 1820s through the 1930s, but newer bridges now overlay or overshadows those structures. A rail tunnel built in the 1890s was widened in the 1930s, and has now been modified to allow taller train cars to pass through. The present existence of the tunnel simultaneously indicates and obscures its own past. 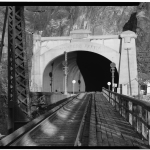 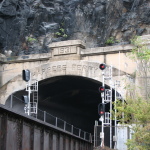 2014. Note the expansion carved in the left wall of the tunnel.

Perhaps an archaeological team could recover some parts of Harpers Ferry that have been long hidden. They could excavate the foundations, identify their purpose, and post plaques explaining their existence. But the grand buildings can never be recovered in full. The bustling manufacturing industry will never return to Harpers Ferry, in physical presence or historical representation. How could we represent an entire island filled with factories, trains, and people that is now lost?

Historians work is in shadows, both physical and temporal. We represent lost places, persons, and experiences, primarily in the form of written words. But our representations are shadows themselves. Regardless of our efforts, the Harpers Ferry that once touched so many lives will never be known again, but through shadowy reflections and representations.